Have you ever read something and thought, “I’m not sure what that means” or ‘is that really correct”? Welcome to our series of quickfire interviews that attempt to unravel those interesting words and phrases.

In this edition, we speak to Wills, Trusts & Estates Associate Marcus Schivo, who talks to us about the word he finds interesting, forfeiture. 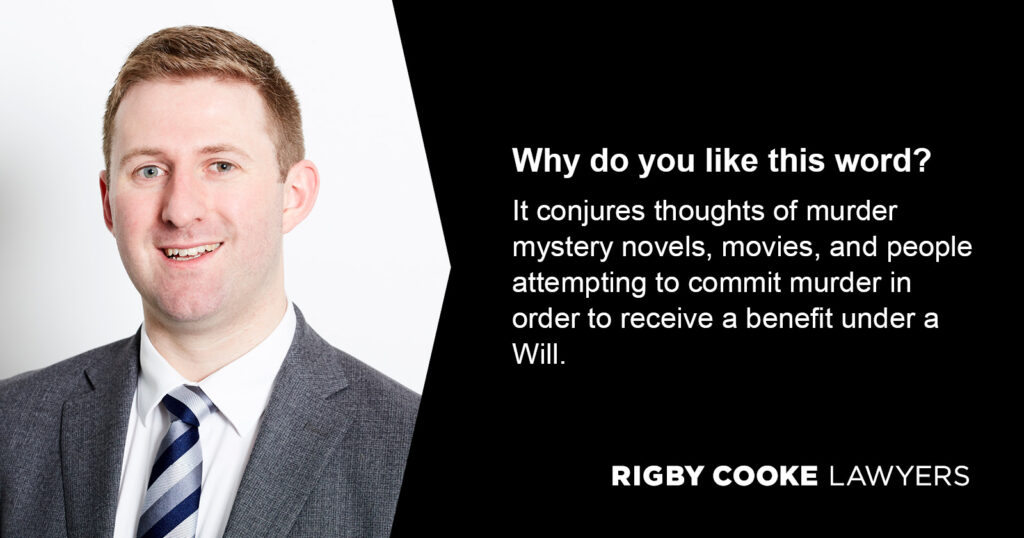 What word have you chosen and what does it mean?

In a general context, it can mean a ‘fine’ or a ‘penalty’ when used as a noun. As a verb, it means to lose or become liable to lose. In a sporting context, a team might forfeit a match because it has insufficient players to play in the match.

In the context of Wills and Estates law, the ‘rule of forfeiture’ applies to a very particular set of circumstances. A person who unlawfully kills another person cannot acquire any benefit that arises from that person’s death.

It conjures thoughts of murder mystery novels, movies, and people attempting to commit murder in order to receive a benefit under a Will.

What’s been the most interesting use of this word that you have come across?

In the case of Gonzales v Claridades, which was heard by the Supreme Court of NSW in 2003, Mr Gonzales had been charged with murdering his two parents and his sister. The terms of the Wills of Mr Gonzales’ parents had the effect of leaving all of their respective estates to Mr Gonzales.

Mr Gonzales issued an application with the Court seeking an order that the executor of his father’s estate pay him sufficient money from that estate in order to finance the defence of his criminal charges.

The Court dismissed Mr Gonzales’ application and took into account that it is a matter of public policy that the rule of forfeiture exists, and that allowing Mr Gonzales to receive a distribution from his father’s estate on the basis sought might contravene a rule of public policy.

When did you first come across this word in a legal context?

During my studies while completing my Masters of Laws in Wills and Estates. Thankfully I’ve not handled a matter in practice where the rule applied. However, we did handle a tragic matter some time ago in which an executor appointed in a Will was forced to renounce his appointment, as he was being held in custody awaiting trial for the murder of the person whose Will appointed him as executor.

The Legal Language – Effluxion of time