Almost 6 years ago, as part of the 2016-17 Federal Budget, the Government announced that it would make amendments to improve the operation of Division 7A of the Income Tax Assessment Act 1936 (ITAA 1936). The Government reiterated this intention in the 2018-19 Federal Budget, also clarifying that it will ensure that unpaid present entitlements (UPEs) come within the scope of Division 7A.

Following a Treasury consultation paper released in October 2018, there has been no draft legislation or further consultations announced.

Fast forward to February 2022, and the Australian Taxation Office (ATO) has issued draft Tax Determination TD 2022/D1 which broadens the scope of Division 7A to sub-trust arrangements involving UPEs. It is unclear whether this is intended as a substitute for comprehensive legislative amendments.

When does Division 7A apply?

Division 7A operates to ensure that private companies do not make tax-free distributions of profits to shareholders or their associates in the form of payments, loans or forgiven debts.

A private company will be taken to pay an unfranked dividend if it makes a loan to a shareholder or their associate unless the loan is fully repaid or converted into a Division 7A complying loan by the company’s lodgement day for the income year.

A ‘loan’ for the purposes of Division 7A includes any ‘form of financial accommodation’.

Bucket companies and the provision of financial accommodation

Private family groups often utilise discretionary trusts as part of their business structure. The trustees will often appoint trust income to a related private company beneficiary (colloquially known as a ‘bucket company’). The bucket company is then assessed on its share of the trust’s net income, paying tax at the corporate rate of 30% or 25% for base rate entities1 rather than the progressive marginal rates applying to individual beneficiaries with a top rate of 45% (plus Medicare levy of 2%).

Where the trustee appoints trust income to a corporate beneficiary but the entitlement is not paid, the company has a UPE owing from the trustee.

This is a particular risky area for family groups, where it is more likely that the trustee of the discretionary trust and the director(s) of the corporate beneficiary will be the same individuals, such that both entities have the same ‘directing mind and will’ – the consequence being that the company will immediately have ‘knowledge’ of its UPE upon the trustee resolving to distribute trust income to the corporate beneficiary.

In PS LA 2010/42, the ATO previously took the view that a UPE owing to a corporate beneficiary would not be treated as a Division 7A loan if the funds representing the UPE were held on sub-trust for the sole benefit of the company. This was due to the rationale that where the funds are held on sub-trust solely for the benefit of the corporate beneficiary, its present entitlement to the trust income has been paid. In these circumstances, there is no outstanding UPE.

Example of a sub-trust arrangement 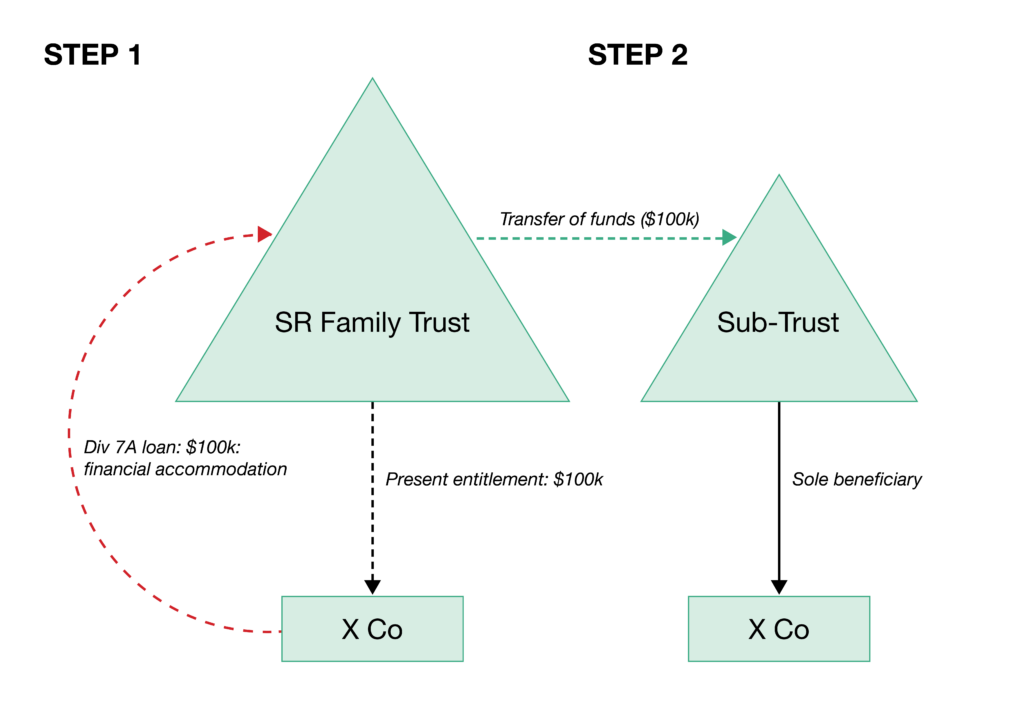 Updated ATO view regarding the use of sub-trusts

The ATO has now revised its position on the use of sub-trusts to avoid the application of Division 7A. The ATO now considers that where a trustee sets aside a UPE owing to a private company into a sub-trust, and the company ‘consents’ to the use of those funds by the trustee, such as where the funds are re-invested in the main trust, this constitutes the provision of financial accommodation from the private company to the trustee.3

It is now critical that funds held in sub-trusts are not mixed with the funds of the main trust, and that there is sufficient documentary evidence to show that the funds are held for the sole benefit of the corporate beneficiary.

The ATO’s updated view broadens the circumstances in which sub-trust arrangements will trigger Division 7A, resulting in a high risk of these provisions applying to private groups where the trustee and corporate beneficiary have common controllers.

In its Top 500 private groups tax performance program, the ATO concluded that Top 500 shareholders and their associates were accessing company funds for private use, including transactions through associated trusts, in non-compliance with Division 7A. In light of these conclusions, and the new ATO guidance, it is expected that there will be increased compliance activity focused on private groups.

We note that TD 2022/D1 was released together with several other publications related to reimbursement agreements under section 100A of the ITAA 1936 (TR 2022/D1, TA 2022/1 and PCG 2022/D1). Accordingly, it is clear that the use of trust structures by private groups is a priority focus of the ATO.

TD 2022/D1 states that the ATO will not devote compliance resources to sub-trust arrangements conducted in accordance with PS LA 2010/4 in respect of trust entitlements arising before 1 July 2022. However if the ATO becomes aware of a sub-trust arrangement during the course of an audit, we expect that such arrangements would be examined.

Please contact the Tax team if you are currently subject to an ATO investigation or audit. We can also assist private groups in reviewing their current arrangements to ensure compliance with the new guidance.

1. Being companies with aggregated turnover for the year of less than $50 million and which have no more than 80% of their assessable income being passive income.
2. Practice Statement Law Administration 2010/4: Division 7A: trust entitlements.
3. In these circumstances, the private company has made a loan to the trustee, being a shareholder or associate of a shareholder (by virtue of the common controllers).

Full-blood or half-blood does it matter?