Private binding rulings are a mechanism in the Australian tax administration system where a taxpayer may seek the ATO’s view on the treatment of a transaction without going through the formal objection or dispute process. 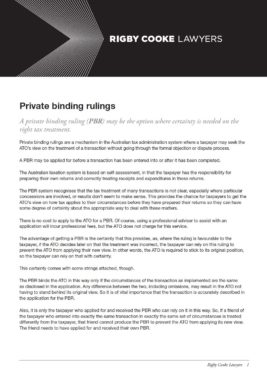 A private binding ruling (PBR) may be the option where certainty is needed on the right tax treatment.

A PBR may be applied for before a transaction has been entered into or after it has been completed.

The Australian taxation system is based on self-assessment, in that the taxpayer has the responsibility for preparing their own returns and correctly treating receipts and expenditures in those returns.

The PBR system recognises that the tax treatment of many transactions is not clear, especially where particular concessions are involved, or results don’t seem to make sense. This provides the chance for taxpayers to get the ATO’s view on how tax applies to their circumstances before they have prepared their returns so they can have some degree of certainty about the appropriate way to deal with these matters.

There is no cost to apply to the ATO for a PBR. Of course, using a professional adviser to assist with an application will incur professional fees, but the ATO does not charge for this service.

This certainty comes with some strings attached, though.

This comes up more frequently where an individual may be running a business or hold investments through entities. If the individual applies on behalf of Company A, which they own 100%, and receives a favourable ruling, only Company A may rely on that PBR. If the individual also owns Company B, which enters into the exact same transaction, Company B needs to get its own PBR to have the same level of certainty. It does not matter that it is the same individual who owns both companies and would have been behind both applications.

Of course, there is also the risk that the ATO may provide a negative ruling. In this case, the taxpayer is not required to apply the ATO’s view in preparing their return, but not doing so carries a very high degree of risk.

Where a taxpayer has received a PBR and applies a different treatment in their return, as well as the ATO seeking the additional tax that would be applicable, the level of penalties is increased as well.

In the event of a negative ruling, the taxpayer may challenge this view through the formal objection process. This creates its own set of difficulties and an alternative means of challenging the ATO’s position may be more appropriate in many circumstances.