From 1 April 2020, in a significant extension to the director penalty regime, company directors will be personally liable for unpaid GST (including luxury car tax and wine equalisation tax).

The director penalty regime operates to hold directors personally liable for specified tax liabilities of their company. To date, the regime has applied to a company’s unpaid pay-as-you-go (PAYG) withholding and superannuation guarantee liabilities.*

The measures extending the director penalty regime are contained in the Treasury Laws Amendment (Combatting Illegal Phoenixing) Act 2020 (the Act), which received Royal Assent on 17 February 2020. The Act contains various measures as part of the Government’s ongoing reform of Australia’s corporate insolvency regime with a focus on illegal phoenix activity. 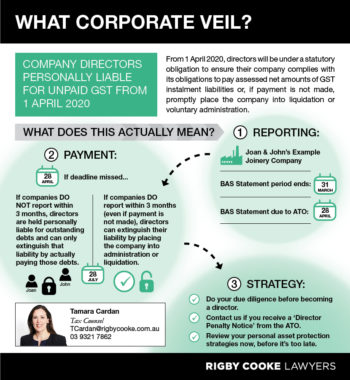 How will the director penalty regime apply to GST?

From 1 April 2020, directors will be under a statutory obligation to ensure their company complies with its obligations to pay assessed net amounts of GST instalment liabilities or, if payment is not made, promptly place the company into liquidation or voluntary administration.

For instance, for the September quarter, the initial day is 30 September. Persons who were directors on 30 September will become personally liable for any GST liability that has not been paid by 28 October, the due day.

The penalty arises automatically, unless the company has been placed into liquidation or voluntary administration on or before the due day.

New directors who are appointed after the due day will become subject to the penalty if the GST liability remains unpaid for a further 30 days. In this instance, the penalty will be due and payable at the end of that 30th day.

How can a director satisfy his or her personal liability?

The methods by which a director can absolve himself or herself of personal liability wholly depends on whether the Australian Taxation Office (ATO) was notified of the liability within three months after the due day.

A director penalty may generally be remitted by the ATO if, before a DPN is issued, or within the 21-day period after the DPN is issued, the company pays the liability, or an administrator or liquidator are appointed.

However, where three months have lapsed after the due day, and the GST liability remains unpaid and unreported to the ATO, the director penalty cannot be remitted by the director placing the company into administration or commencing to wind it up. The penalty is ‘locked down’ and the only way to obtain remission is to make full payment of the liability.

It is therefore critical that directors report their company’s GST liability to the Commissioner within this three-month period, even if payment of the underlying liability is not made.
For instance, in respect of GST quarterly reporting, the relevant reporting dates are as follows:

For example, a company’s business activity statements (BAS) for the March quarter is due for lodgment on 28 April. Persons who were directors on the initial day (ie 31 March) will become personally liable for any GST liability that remains unpaid by the due day. The BAS for the March quarter must be lodged by 28 July, the lockdown date, to ensure that directors can achieve remission by placing the company into administration or liquidation.

Lodgment of the BAS within the three-month period will have the following consequences:

Failure to lodge the BAS within the three-month period will have the following consequences:

Accordingly, it is critical to ensure that all BAS and GST returns are lodged on time, and before the lockdown date. If there is any delay in lodging a BAS, companies should promptly seek an extension of time for lodgment with the ATO.

The director penalty regime is complex, and the above information is a brief snapshot of the critical aspects of the regime. We can provide you with further detailed advice regarding the application of the regime to your particular circumstances.

The extension of the director penalty regime to GST will impact many companies and will result in directors being at significant risk of being held to account for inadvertent oversights and systemic errors. Directors will need to be more actively involved in their company’s GST reporting processes and have a greater understanding of the operation of the GST system.

The extension of the regime will increase the extent to which directors’ assets will be at risk, particularly in an insolvency. We can work with you to ensure you have adequate asset protection structures in place.

Individuals who are considering accepting a directorship must be vigilant and conduct a thorough due diligence in respect of the company’s solvency, tax compliance history, and internal systems for remitting PAYG withholding amounts, and paying superannuation guarantee and GST to ensure these systems are adequate. If you are considering accepting a directorship, we can assist you in conducting this due diligence process.

If you have been issued with a DPN, we can work with you and make submissions to the ATO to assist in the remission of your liabilities or negotiate payment plans.