HR Hot Tip – Are your independent contractors at risk of being deemed employees?

Welcome to our series of HR interviews with Lawyer Monika Nosal who answers some of the most common questions asked by HR managers regarding employees’ legal entitlements. 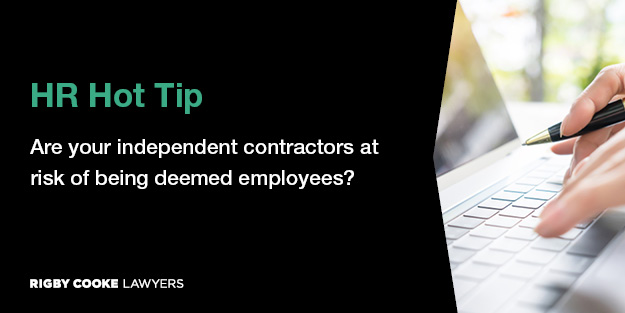 However, misclassifying a worker as an independent contractor when they are really an employee may lead to an employer becoming liable for superannuation and unpaid leave entitlements. In addition, the misclassification could also result in penalties being imposed on the organisation for breach of the National Employment Standards (NES), any applicable modern award or enterprise agreement and for engaging in ‘sham contracting’.

Some common factors considered include the following:

Employers obligations under the NES, modern awards, enterprise agreements and contracts can be complex, overlapping, and at times confusing.

Employers need to familiarise themselves with and understand their legal obligations to avoid any possible claims by employees (both existing and former) and unsuccessful job applicants, as well as prosecution by the Fair Work Ombudsman. Under the accessorial liability provisions of the Fair Work Act 2009 (Cth), employers and individuals such as directors and HR managers can be personally held accountable for breaching workplace laws in certain circumstances.

A HR Legal Audit conducted by Rigby Cooke can provide the HR function and, in turn, provide employers with comfort in knowing that they are legally compliant, or at least provide advance warning of any potential compliancy issues before they become problematic.

HR Hot Tip – Which industrial instruments apply to which groups of employees?

HR Hot Tip – What terms and conditions apply to employees who are not covered by an industrial instrument?

HR Hot Tip – What requirements do you have to consult with employees and/or unions about “major changes”?